Arterius has developed a polymer-based bioresorbable scaffold (or “BRS”) ArterioSorb™ that is intended to:

Accomplishing the above will support the positioning of a premium priced BRS product which could claim significant stent market share with higher margins than existing Bare Metal Stent (BMS) and Drug Eluting Stent (DES);

ArterioSorb™ is produced from the FDA approved polymer, PLLA, which is already universally approved for use in cardiovascular stents, sutures and orthopaedic applications. ArterioSorb™ is a tubular stent with closed-cell (with connectors for strength) and open-cell (with fewer connectors for flexibility) modules and increasing cell size as one moves away from the centre: The smaller cells at the centre provide the greatest radial support and higher drug delivery, where the stenosis is most severe, while the larger cells provide greater flexibility for ease of implantation.

The design also allows a thinner strut thickness, which is conventionally associated with lower incidence of [thrombosis and restenosis]. An example of a prototype open-cell design is illustrated in Figure 1.

The team at Arterius believe that the bioresorbable scaffold shown above has a competitive product profile and can be positioned for success both in the EU and in other large commercial markets. In particular, the precedents set in the adoption of DES technology suggest that if future BRS trials, including Arterius’s ArterioSorb™, can provide data evidencing the prevention of late in-stent restenosis (and need for repeat procedures) and late-stent thrombosis, which are considered amongst the most pressing unmet needs in interventional cardiology, then these technologies could claim a large proportion of the $8.1bn market.

When a stent is implanted, it physically prevents the artery from narrowing. Metal is a perfect material for this. Arterius believes that its bioresorbable scaffold will have mechanical performance (radial strength) comparable to the best-in-class DES products.

Furthermore, this will be maintained for at least 3-6 months post device implantation (which is considered the period over which the vessel is remodelled) enable the vessel to recover its natural shape whilst avoiding recoil and malapposition.

The development of DES with their anti-proliferative/anti-inflammatory drug coatings has significantly contributed to the reduction of restenosis; late stent thrombosis and the need for repeat revascularisation. The ArterioSorb™ PLLA scaffold is therefore coated with a bioabsorbable polymer containing the anti-proliferative drug Sirolimus (Rapamycin).

One of the principal problems with BMS and DES are that they remain within the vessel and therefore any subsequent need for revascularization is at best complicated. Furthermore, the long term presence of a foreign body in the lumen has been associated with late stent thrombosis. Once the vessel integrity has been restored and a permanent scaffold is no longer necessary, ArterioSorb™ will become completely encapsulated within the vessel wall and fully bio-resorb within a 12 to 24 month time frame. Importantly, any subsequent revascularization will not encounter a vessel which retains evidence of the ArterioSorb™ device. Additionally this would reduce “stent jailing” where the stent occludes an artery which branches off the main artery and could be particularly useful in paediatric cases, where vessel growth dictates that metal stents must be surgically removed.

There are many examples of superior medical technologies which have not been adopted because they are harder to use. Any commercially successful BRS technology must therefore match the ease of delivery of BMS/DESs. ArteriSorb™ will address several shortcomings that have thus far limited the adoption of first generation BRS products:

The development of a patent technique for the manufacture of ArterioSorb™ is central to its highly competitive mechanical performance and low cost manufacturing process.

The manufacture of a bioresorbable polymer scaffold with mechanical properties similar to those of its metal counterparts comes with significant challenges: Polymers do not typically exhibit the combination of malleability (required in a stent for crimping onto a balloon catheter and expansion in situ) and mechanical strength (required in order to provide radial support to the target vessel). While polymers can be engineered to exhibit one of these characteristics, it is often at the expense of the other: Amorphous polymer, for example is more malleable but susceptible to hydration which limits its mechanical strength in situ, while crystalline polymer can match the strength of steel, but is more brittle leading to problems with crimping and placement.

A number of different processing approaches have been developed by competitors to improve the combined material properties of polymers, including blow moulding, dip coating and annealing. However none of these processes deliver the requisite mechanical characteristics. As a result first generation BRS products either compensate (through greater bulk) or are clinically inferior to DESs (poor radial strength and deliverability). These processes also comprise several steps, making them expensive relative even to the current BRS devices, further limiting their appeal. 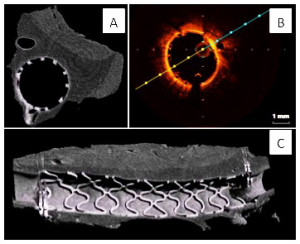 Arterius initiated a pre-clinical study which was performed by an experienced cardiovascular pre-clinical model specialist. The trial sought to evaluate ArterioSorb™ for acute performance. Key performance parameters of the pilot study that were evaluated included: